The exciting thing about the new Atom processors of the x6000E series is that they have some technical features that are explicitly aimed at applications in automation or in vehicles - but not only.

These new chips target a wide range of markets including ULP servers, networking, memory, edge and IoT.
The new processor generation is marketed as Atom x6000E for embedded systems and as Pentium J6000 and Celeron N6000 for devices for the Internet of Things. Compared to the previous Bay Trail or Apollo Lake of 2016, the new chips offer dramatically higher computing and graphics performance.

Intel also integrates up to 32 EUs into the heavily revised graphics unit (Gen11), which greatly increases speed. The quad-core chips perform in the 10 watt performance class and are equipped with a 128-bit interface for LPDDR4X-3200 or LPDDR4-2400 memory.

Elkhart Lake is not a system-on-a-chip (like Whiskey Lake Core i-U), so an additional I/O hub chip is needed, which is soldered to the same carrier. The processors support up to three monitors via display port 1.3 and HDMI 2.0b, plus eMMC 5.1 and UFS 2.0 for flash memory. Elkhart Lake also offers PCIe Gen3.0 with 8 lanes and USB 3.2 Gen1 for external expansion.

A new feature is an integrated ARM computing core of type Cortex-M7, which operates as a Programmable Services Engine (PSE) with firmware based on the Zephyr real-time operating system. This economical core can take over tasks even when the two or four x86-64 cores are asleep. The PSE controls real-time functions typical for industrial applications: Acquisition of sensor signals, reaction to network signals, out-of-band management - with the main processor switched off.

The main memory is LPDDR4X-3200-SDRAM with two or four x32 channels. The Atom types can protect the RAM against the most common bit errors by generating Error Correction Code (ECC) when saving and checking it when reading. No additional memory chips are required for this, instead part of the existing RAM is used for ECC (in-band ECC).

Also interesting is what the x6000E Atom processors don't have: the Turbo mode, which brings out the last bit of acceleration from PC applications. This feature is superfluous for automation applications and only leads to unnecessary heat generation. These architecture decisions show that Intel takes the industrial market as a key market environment very seriously and is no longer serving it with relabelled PC products.

You can be sure: You will again expect industry-leading products in the form of SBCs and IPCs / EPCs from Beckhoff Automation on the latest Intel platforms & technologies! 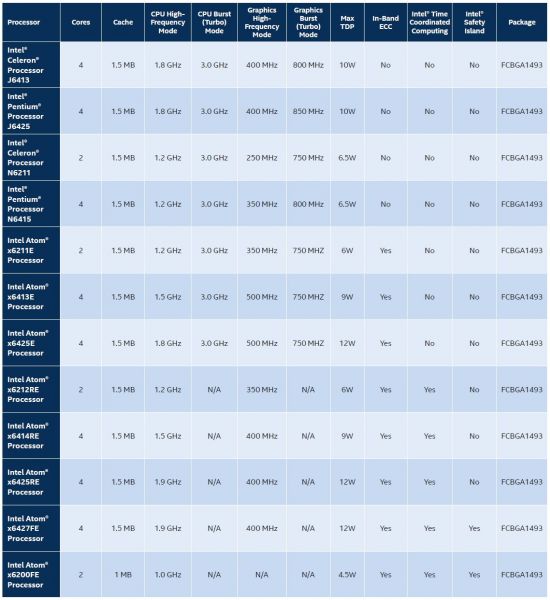 The RE and FE versions of the Atom x6000E are designed for real-time control tasks and have Time Coordinated Computing (TCC) and Time Sensitive Networking (TSN) capabilities.

In addition to TSN, the I/O interfaces also include a CAN/CAN-FD interface for industrial applications. There are three Ethernet ports for TSN, which are based on a physical layer with a transmission rate of 2.5 Gbit/s. The three ports can be used, for example, to build a daisy-chain chain and an additional dedicated port. Another special feature is a quadrature encoder input that evaluates signals such as those coming from encoders in motor controllers.